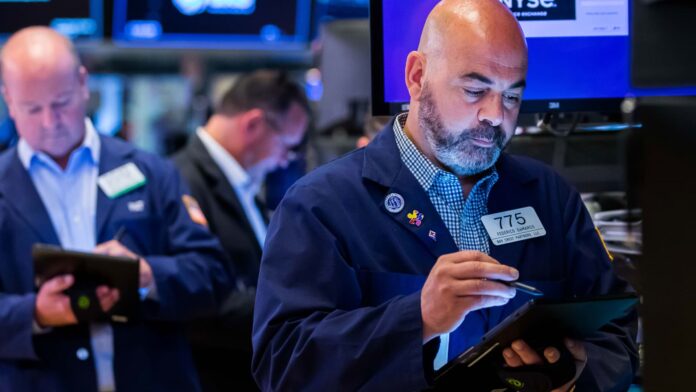 Investors should snap up stocks exposed to more affluent consumers as inflationary pressures grow, according to UBS. UBS’ equity strategists found that stocks exposed to higher-income consumers outpaced stocks tilted toward lower-income consumers by 5% since the end of April, the note out on Tuesday said. Shoppers with higher savings and more disposable income are able to spend on luxury goods despite the rise in food and gas prices. “While the initial consumer spending surge was driven by the reopening theme, we expect another theme to emerge driven by higher income household spending relative to lower income” households, the report said. “This should support premium/luxury vs value brands too as more consumption moves up the quality scale,” the report continued. A search for stocks that could benefit as prices continue to rise returned dozens of names. UBS screened for stocks with a luxury theme. The firm’s strategists then reviewed stocks by beta sensitivity in the 40th percentile from the top and bottom, statistical significance of the beta (T-stat > 2.0), and screened for market caps greater than $1 billion. Here are 10 names that surfaced in UBS’ screen: (Source: UBS) Cosmetics company Coty is set to benefit from a higher-income consumer. Shares spiked more than 5% Tuesday after Coty reaffirmed its current-quarter and full-year outlook. Macy’s is getting a boost from shoppers who are snapping up new outfits and luxury goods. The retailer beat profits and sales expectations in its most recent quarter Nike has the pricing power to pass on higher costs to consumers. The sportswear brand faces challenges from Covid lockdowns in China, but Stifel analysts still reiterated the stock as a buy earlier this month. Other names that surfaced include Under Armour , Victoria’s Secret , Nordstrom, Norwegian Cruise Line Holdings , Ulta , Chipotle and Simon Property Group . UBS’ strategists also found names that have more exposure to lower-income consumers: Stocks with lower-income consumer exposure include Abercrombie and Fitch . Last month, the apparel retailer reported inventory was up 45% in its most recent quarter from the same period one year ago. Abercrombie and Fitch cut its sales forecast for the year. Fast-food restaurant Yum! Brands has exposure to lower-income consumers. Last month, UBS reiterated the Pizza Hut and Taco Bell owner as a buy thanks to its scale and competitive positioning. Other stocks with exposure to lower income consumers included Gap , Ollie’s , Six Flags , Kohl’s , Carnival Corporation , Dollar General , Five Below and Wendy’s .

These midcap stocks are loved by analysts, including one name expected to double