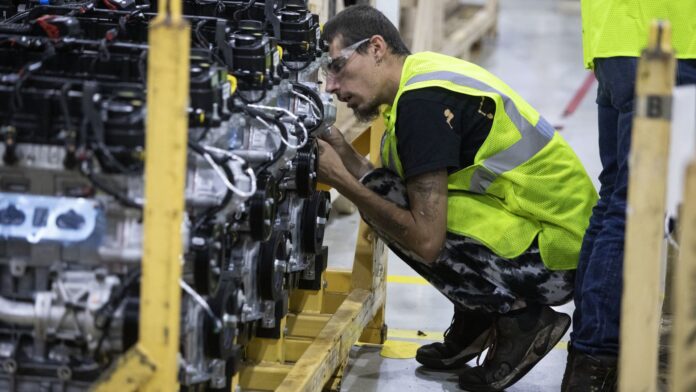 Engines undergo a final inspection at the Stellantis Dundee Engine Complex on August 18, 2022 in Dundee, Michigan.

The spiking costs of critical raw materials used by automakers such as steel, aluminum and others for EV batteries have been largely offset by record pricing of new vehicles, cushioning automakers’ margins. But as price increases slow, costs have yet to follow.

Palmer said he expects the favorable pricing of new vehicles to continue into next year, but said inflation could continue to hit other parts of the automaker’s supply chain.

“What we will see in 2023 is a lower impact from raw material inflation than the one we’ve seen this year. So, the entity of inflation impact, I think will be lower in 2023,” he said when discussing the company’s third-quarter revenue and deliveries. “Inflation may be high on other elements of the cost curve, but they are of a lower entity compared to raw material this year.”

Palmer did not specify what inflationary costs he expected to decrease or increase in 2023. A spokeswoman for Stellantis, which was formed by the merger of Fiat Chrysler and France-based Groupe PSA in January 2021, said Palmer was referring to lower inflation costs of steel and aluminum. She declined to disclose what elements could be higher next year.

Costs across the automotive supply chain have skyrocketed during the coronavirus pandemic, as companies have struggled with logistics, materials and employees.

Ford in September warned investors that the company expects to incur an extra $1 billion in costs during the third quarter due to inflation and supply chain issues. The problems resulted in parts shortages affecting roughly 40,000 to 45,000 vehicles, primarily high-margin trucks and SUVs that haven’t been able to reach dealers.

In June, AlixPartners reported raw that material costs for both electric vehicles and traditional models with internal combustion engines more than doubled during the coronavirus pandemic.

Crypto billionaire Sam Bankman-Fried blames himself for FTX’s collapse, admits he ‘f—ed up’