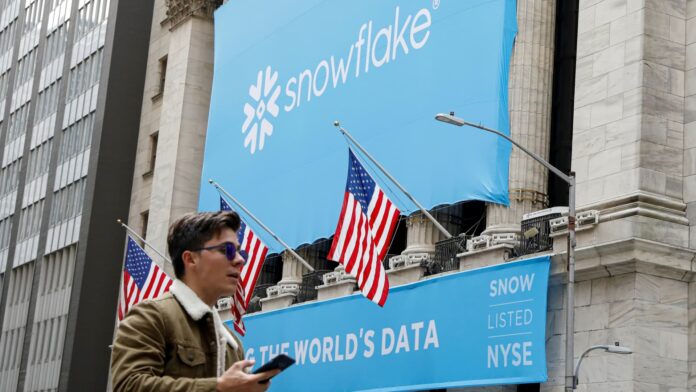 There could be some big gains ahead for Snowflake, JPMorgan said Thursday. The firm upgraded the cloud data provider’s shares to overweight from neutral. JPMorgan also reiterates its price target of $165 per share, which is 30% above Wednesday’s close. “We are incrementally confident that Snowflake is reaching an inflection point in terms of material FCF generation, and we think that trendline has the potential to surprise positively, creating the initial framework toward FCF-based valuation support,” analyst Mark Murphy also said in the note. Murphy noted that Snowflake shares are trading at a big discount from when they were priced at more than $400 in November. Their current price is slightly higher than its IPO price of $120 from September 2020. JPMorgan’s upgrade comes after the firm conducted a survey of 142 chief information officers in which Snowflake ranked No. 1 in “installed base spending intentions and disproportionately #1 among emerging companies whose vision most impressed respondents.” “Snowflake is benefiting from demonstrable secular tailwinds illustrated quantitatively and qualitatively in our CIO Survey,” he added, while also exhibiting positive cash flow for FY23, “setting up an attractive risk/reward dynamic.” Murphy said Snowflake is in “excellent standing” among customers, based on customer interviews conducted by the bank. He also highlighted the long-term vision of the company, as it was laid out at a recent Investor Day. That “cements its position as a critical emerging platform layer of the enterprise software stack,” Murphy said. —CNBC’s Michael Bloom contributed reporting.

Visiting Helion Energy when the Seattle region was cloaked in smoke

Wait for market to decline more before putting cash to work