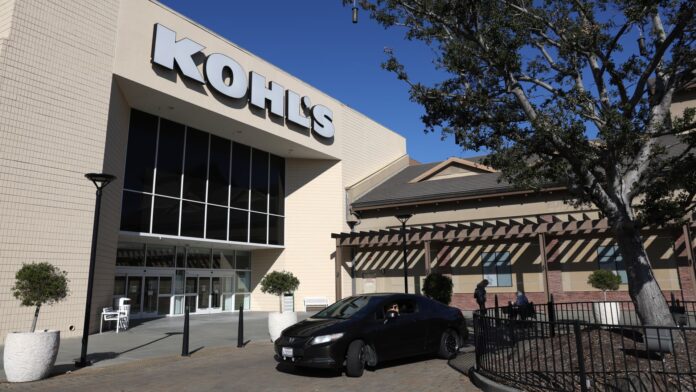 The Kohl’s logo is displayed on the exterior of a Kohl’s store on January 24, 2022 in San Rafael, California.

Kohl’s said Monday that it has entered into exclusive negotiations with retail holding company Franchise Group, which is proposing to buy the retailer for $60 per share.

Such a price tag would value Kohl’s at roughly $8 billion.

Kohl’s shares closed Monday at $42.12, giving the retailer a market value of about $5.4 billion.

Franchise Group is working with Oak Street Real Estate Capital to finance the deal mostly through real estate, according to a person familiar with the matter. The person requested anonymity because the deal isn’t finalized.

A representative for Oak Street Real Estate declined to comment.

The transaction remains subject to approvals of both companies’ boards of directors, Kohl’s said in a press release. There’s no guarantee that any agreement will be reached, it said.

The exclusive period of three weeks will allow Franchise Group — which owns the Vitamin Shoppe and Buddy’s Home Furnishings, among other brands — and its financing partners to finalize due diligence and financing arrangements, and for the parties to complete the negotiation of binding documentation, Kohl’s said.

The retailer added that it will have no further comment until an agreement is reached or the discussions are terminated.

The saga at Kohl’s has been playing out for more than half a year.

The off-mall department store chain was first urged in early December 2021 by New York-based hedge fund Engine Capital to consider a sale or another alternative to boost its stock price. At the time, Kohl’s shares were trading around $48.45.

In mid-January, activist hedge fund Macellum Advisors then pressured Kohl’s to consider a sale. Macellum’s CEO, Jonathan Duskin, argued that executives were “materially mismanaging” the business. He also said Kohl’s had plenty of potential left to unlock with its real estate.

In early February, Kohl’s said it had brought on bankers at Goldman Sachs and PJT Partners to help the retailer field offers.

Last month, Kohl’s reported that its sales for the three-month period ended April 30 fell to $3.72 billion from $3.89 billion in 2021. The company also slashed its profit and revenue forecast for the full fiscal year, disappointing investors and muddying the picture for a potential deal.

What the inverted yield curve means for your portfolio