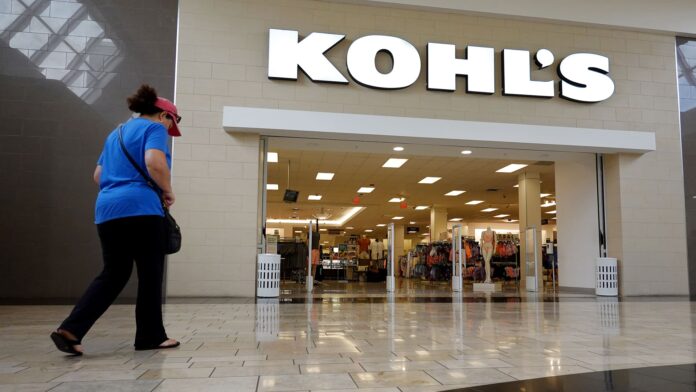 People walk near a Kohl’s department store entranceway on June 07, 2022 in Doral, Florida.

Kohl’s on Thursday again slashed its financial forecast for the year, saying that its middle-income customers have been particularly pressured by higher inflation, putting a damper on sales.

Chief Executive Officer Michelle Gass said in a statement that the company is adjusting its business plans and taking actions to reduce inventory and trim expenses “to account for a softer demand outlook.”

Shares of Kohl’s fell in premarket trading, even after Kohl’s beat analysts’ lowered expectations for its fiscal second-quarter profit and revenue, as investors were more focused on future guidance.

The news from Kohl’s comes the same week that Walmart and Target both reiterated their full-year forecasts even as their profits come under pressure. Walmart said it saw more higher- and middle-income consumers visiting its shops in searched of discounted items, helping its overall performance. Target’s earnings, however, were weighed down by its efforts to clear through excess merchandise at steep markdowns before the holiday season.

Here’s how Kohl’s did in its fiscal second quarter compared with what analysts were anticipating, based on Refinitiv estimates:

“While 2022 has turned out to be more challenging than initially expected, Kohl’s remains a financially strong company,” said Gass.

Kohl’s shares have fallen about 31% so far this year, as of Wednesday’s market close.

Elon Musk has himself to blame for Twitter ad woes, activists say