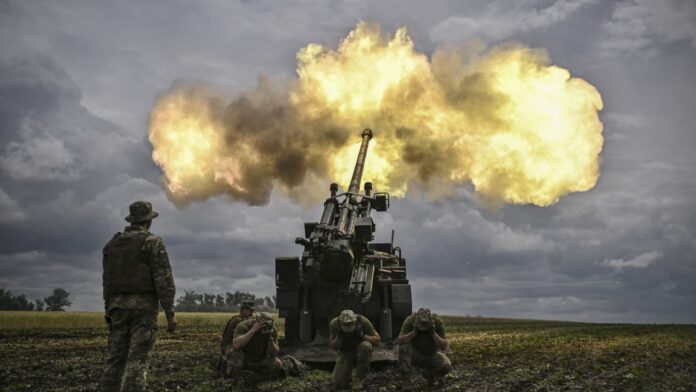 Russians ‘destroying everything they see in front of them’ as they try to advance, Ukraine official says

Russian forces are reportedly attempting to break through to Siversk — a town that lies between the Luhansk and Donetsk regions in eastern Ukraine — in order to open a way to nearby Bakhmut in Donetsk, a Ukrainian official said.

Luhansk Regional Military Administration Head Serhiy Haidai said on Telegram Thursday that “Russians are attempting to break through to Siversk and open the way to Bakhmut” via small settlements and that in order to advance, “they are destroying everything they see in front of them.”

“Now they are conducting the offensive in the direction of Verkhniokamianske [near Siversk]. Battles are underway,” Haidai noted.

A Ukrainian sniper wears on a balaclava in a cellar in Siversk, Ukraine, July 08th, 2022.

Haidai said Russian troops had launched 12 missile and air strikes on settlements situated at the border of the neighboring Luhansk and Donetsk regions, the epicenter of the war right now and the location of fierce fighting for months.

“They continue massive artillery and mortar shelling, and use multiple launch rocket systems,” Haidai, who gives regular updates on the military situation in his region, said.

Capturing Bakhmut is a strategic aim for Russia as its forces seek to advance into Donetsk having captured Luhansk several weeks ago, while Ukrainian forces are trying to stall and thwart their opponents’ advances as much as possible.

Russian forces continue to assault areas around the cities of Sloviansk, Kramatorsk and Bakhmut in Donetsk in the Donbas region of eastern Ukraine, Ukraine’s armed forces said Thursday morning.

The cities are believed to be key targets for Russia as its forces look to advance into the Donetsk region, having already seized the whole of neighboring Luhansk in recent weeks.

The general staff of Ukraine’s armed forces said on Facebook Thursday morning that Russian forces were shelling various settlements around Sloviansk, nearby Kramatorsk and Bakhmut, with tanks and tube and rocket artillery.

Ukrainian forces had repulsed some of the attacks to the south of Bakhmut, the general staff’s spokesperson Oleksandr Shtupun said. CNBC was unable to verify the information in the report.

Ukrainian servicemen ride on a tank from the battlefield near Siversk in the Donetsk region of Ukraine on July 8, 2022.

Britain’s Ministry of Defense, in its latest intelligence update Thursday, said that Russian forces “continue to conduct artillery strikes across a broad front [in the Donbas], followed by, in some areas, probing assaults by small company and platoon-sized units.”

However, they have achieved no significant territorial advances over the last 72 hours and are in danger of losing any momentum built up following the capture of Lysychansk, the last city Russian forces seized in Luhansk before they tried to advance into Donetsk.

“The ageing vehicles, weapons, and Soviet-era tactics used by Russian forces do not lend themselves to quickly regaining or building momentum unless used in overwhelming mass – which Russia is currently unable to bring to bear.”

Russia, Ukraine, Turkey and United Nations officials met in Istanbul on Wednesday to try to reach a deal that would allow exports of vital produce, such as grain and sunflower oil, to resume from Ukraine.

Russia, Ukraine, Turkey and United Nations officials met in Istanbul on Wednesday to try to reach a deal that would allow exports of vital produce, such as grain and sunflower oil, to resume from Ukraine.

The latter three said there had been progress at the talks, with Turkish Defense Minister Hulusi Akar saying an agreement would be signed next week, but U.N. Secretary-General Antonio Guterres said more work is needed before a deal is finalized.

The deal would see a joint coordination center set up to oversee the safe export of produce, with Ankara saying that it would inspect cargoes and ensure the safety of ships in transit. A deal would relieve a global food crisis caused not in small part by the blockade on exports from Ukraine, one of the world’s largest exporters of wheat and sunflower oil.

Zelenskyy noted that the Ukrainian delegation had informed him that there was some progress at talks yesterday. “We will agree on the details with the UN Secretary General in the coming days,” he added.

The death toll from a Russian missile strike on an apartment building in the town of Chasiv Yar in Donetsk in eastern Ukraine has risen, with 48 civilians now declared to have died in the attack, including one child.

Ukraine’s emergency services said on Telegram that the number of people rescued from the rubble remained at nine.

Firefighters and rescue workers clear the scene after a building was partially destroyed by shelling, in Chasiv Yar, eastern Ukraine, on July 10, 2022.

President Zelenskyy remarked on the tragedy on Wednesday night, saying debris clearance would continue until all the rubble is cleared.

“It was one of the most brutal Russian strikes during the entire war – so many victims… My condolences to the relatives and friends of the victims,” he said.

A displaced Ukrainian and child make their way to board a bus for onward travel at a temporary refugee center, setup at a disused Tesco building, in Przemysl, Poland, on Wednesday, March 16, 2022.

More than 5.8 million people have fled across Ukraine’s borders to other locations in Europe since Russia invaded in February, according to the latest data compiled by the United Nations.

Of that total, more than 3.6 million people have registered for temporary refugee protection or similar safeguards in Europe.

“The escalation of conflict in Ukraine has caused civilian casualties and destruction of civilian infrastructure, forcing people to flee their homes seeking safety, protection and assistance,” UN researchers wrote in a report.

“Millions of refugees from Ukraine have crossed borders into neighboring countries and many more have been forced to move inside the country,” the report added.

Here’s a look at where Ukrainian refugees have fled:

Wheat grain pours from a machine into a storage silo on Monday, July 8, 2013. Temporary silos will be built along the border with Ukraine to help export more grain to address a growing global food crisis, U.S. President Joe Biden said, according to Reuters.

Russia and Ukraine are slated to meet again in Turkey next week following talks that aim to free up grain exports, Turkish Defense Minister Hulusi Akar said in a statement.

Delegations from Russia, Ukraine, Turkey and the United Nations met in Istanbul earlier.

“We will try to reach a conclusion by carrying out this in coordination with the UN. In this sense, it was agreed that the Ukrainian and Russian delegations should meet again in Turkey next week,” Akar said in a statement.

UN Secretary-General Antonio Guterres said in a press conference that the meeting was a “critical step forward” in the safe and secure export of Ukrainian food products through the Black Sea.

For months, Russian warships have blocked Ukrainian ports on the Sea of Azov and the Black Sea.

A disused border crossing point to Russia is seen on April 15, 2022 in Nida, Lithuania. Russia’s Kaliningrad exclave, on the shore of the Baltic Sea, is sandwiched between NATO members Lithuania and Poland and is the Baltic coasts most strategic transport and trade port.

The Biden administration welcomed the European Union’s decision to implement economic sanctions on Russia and its shipments to and from Kaliningrad.

Kaliningrad, sandwiched between Lithuania and Poland, depends on Lithuania and Belarus to conduct transit traffic between the enclave and mainland Russia.

“It is important to note that there is not now and there never has been a so-called blockade of Kaliningrad. Using a variety of routes, passengers continue to transit between mainland Russia and Kaliningrad, as do all humanitarian shipments and most other goods,” Price added.

In June, Lithuania announced it would halt entry by rail of all EU-sanctioned goods coming from Russia into Kaliningrad.