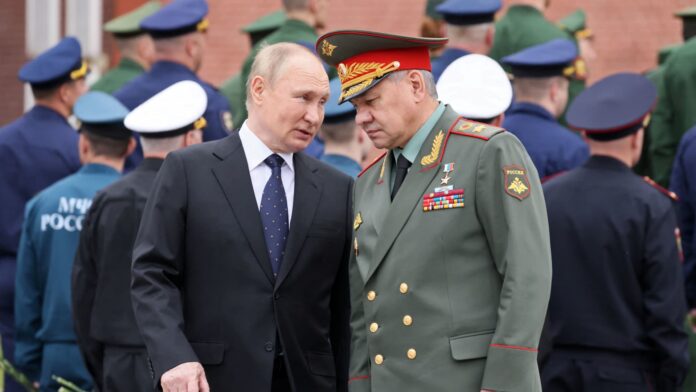 It was announced on Sunday that Prosecutor General Irina Venediktova and the Head of the SBU (the Security Service of Ukraine) Ivan Bakanov were being suspended after Zelenskyy said that there had been cases of treason discovered in both government agencies.

“As of today, 651 criminal proceedings have been registered regarding high treason and collaborative activities of employees of prosecutor’s offices, pre-trial investigation bodies, and other law enforcement agencies,” Zelenskyy said in his nightly address on Sunday.

He said that “more than 60 employees of the prosecutor’s office and the SBU remained in the occupied territory and are working against our state.”

Zelenskyy said “all Russian war criminals” would be brought to justice as well as “each of the collaborators” and “all those responsible for terror.”

There has been no comment from the officials named by Zelenskyy.

Russian President Vladimir Putin and Defence Minister Sergei Shoigu attend a wreath-laying ceremony, which marks the anniversary of the beginning of the Great Patriotic War against Nazi Germany in 1941, at the Tomb of the Unknown Soldier by the Kremlin wall in Moscow, Russia June 22, 2022.

Russian Defense Minister Sergei Shoigu told the country’s armed forces to “intensify” their operations on all fronts, claiming this was to “prevent massive missile and artillery attacks” that he claimed were being launched by Ukrainian forces at civilian infrastructure facilities, the Donbas and other regions.

The remarks by Shoigu, a close ally of President Putin, come after the Ukrainian military said it had carried out a series of successful strikes on Russian ammunition depots and logistics centers in recent weeks.

Shoigu’s comments also mark what could be a more aggressive stance by Russia as Western weapons delivered to Ukraine start to have an impact in this phase of war, which has seen severe fighting in the Donbas’ two main regions: Luhansk, which is now fully occupied by Russia, and neighboring Donetsk in which Russian forces are trying to advance.

Russia claims it is trying to “liberate” the Donbas, where there is a preponderance of ethnic Russians and where two self-proclaimed “People’s Republics” are located. Contrary to Shoigu’s claims, there have been multiple instances of Russia striking civilian infrastructure. Last week, there were multiple deaths following missile attacks on central and eastern Ukraine.

Learn to tread water in these stormy markets. Where investors can turn in choppy times