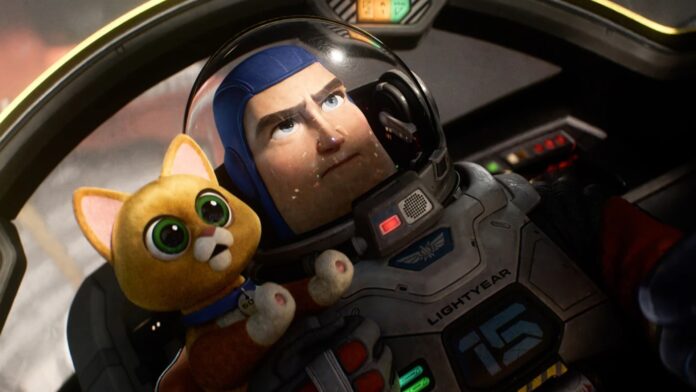 Buzz Lightyear and his robot companion Sox embark on an intergalactic adventure in Pixar’s “Lightyear.”

More than a dozen Asian and Middle Eastern countries will not releases Disney’s “Lightyear” in movie theaters over an animated same-sex kiss, but the ban likely won’t have a major impact on the film’s global box office.

In the film, Buzz’s close friend is a female space ranger who marries a woman. During a montage of milestones in the couple’s life there is a brief kiss between the two.

Countries including Saudi Arabia, Egypt, Indonesia, Kuwait, Malaysia, Lebanon and the United Arab Emirates have decided not to release the film. It is also expected that China will not make the film available.

However, these markets are not make-or-break for the global box office haul of “Lightyear,” if Pixar movies’ past performance is any indication.

“Toy Story 4,” released in 2019, generated more than $1 billion globally. The United States and Canada represented the largest portion of ticket sales, generating 40% of the film’s total box office, or around $434 million, according to data from Comscore. China represented only 3%, around $32.5 million, while the combination of Saudi Arabia, Egypt, Indonesia, Kuwait, Malaysia, Lebanon and the United Arab Emirates accounted for less than 2%, or less than $20 million.

“Though every dollar counts toward offsetting production, marketing and distribution costs, the impact of the non-playability of a Pixar film like ‘Lightyear’ in certain countries will, as the data shows us, not likely have a profound effect on the bottom line,” said Paul Dergarabedian, senior media analyst at Comscore.

Dergarabedian noted that Pixar films are among the most consistent performers at the box office and have been part of the “fabric of American cinematic culture” for decades.

“With the exception of ‘Coco,’ Pixar’s films have recently earned somewhere between 40 and 50 percent of their global earnings from North America alone,” added Shawn Robbins, chief analyst at BoxOffice.com. “For a variety of reasons, the cultural translation of those films has remained domestic-driven, whereas other Hollywood blockbusters often see close to two-thirds or more their worldwide box office generated from international markets.”

“Toy Story 3,” which was released in 2010, was not released in Saudi Arabia, Egypt, Indonesia, Kuwait, Malaysia, Lebanon, the United Arab Emirates or China, and still generated more than $1 billion in global ticket sales. The domestic box office accounted for 41% of those sales, or around $415 million.

The animated feature is expected to haul in between $70 million and $85 million during its domestic debut this weekend.

“Pixar has a history of over-performing expectations, and we’ve seen a clear demand from adults, many of whom are parents, to return to cinemas over the past couple of months,” said Robbins. “With Father’s Day in play and a shortage of high-profile, animated films over the past two years, ‘Lightyear’ could be poised to surpass expectations just as easily as it might otherwise prove to start more modestly than some of Pixar’s biggest hits.”