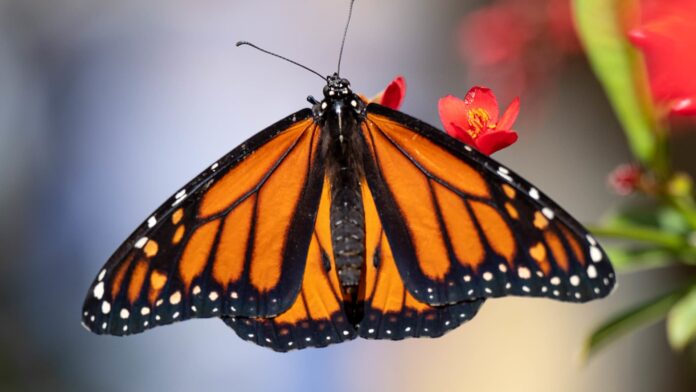 A monarch butterfly in the butterfly pavilion at the LA County Natural History museum Wednesday, June 1, 2022.

The iconic black and orange monarch butterfly is threatened with extinction because of habitat destruction and climate change, international conservationists said on Thursday.

The monarch butterfly, known for its annual migration across the country, was placed in the endangered category of the International Union for the Conservation of Nature’s Red List of Threatened Species.

Every autumn, millions of the butterflies undertake the longest known migration of any insect, flying thousands of miles from breeding grounds in the eastern U.S. and Canada to spend the winter months in Mexico and California.

The monarch population has declined between 22% and 72% over the past decade, scientists said. The western population is at the greatest risk of extinction, declining by 99.9% from an estimated 10 million butterflies to just 1,914 butterflies between the 1980s and 2021.

More than 40,000 species are now threatened with extinction, according to the IUCN, as scientists warn that the Earth is undergoing a sixth mass extinction event driven by human activity.

Legal and illegal logging and deforestation have destroyed large swaths of the butterflies’ winter shelter in Mexico and California. Pesticides and herbicides used in agriculture have also killed butterflies and the milkweed plants that the larvae feed on. High temperatures fueled by climate change have also triggered earlier migrations before milkweed is available.

Scientists are concerned over whether enough monarch butterflies will survive in order to maintain the population and avoid extinction. Conservationists are urging people and organizations to help protect the species, from planting milkweed to reducing pesticide use.

“The Fish and Wildlife Service must stop sitting on its hands and protect the monarch butterfly under the Endangered Species Act right now, instead of hiding behind bureaucratic excuses,” Kurose said.

5 things to know before the stock market opens Tuesday