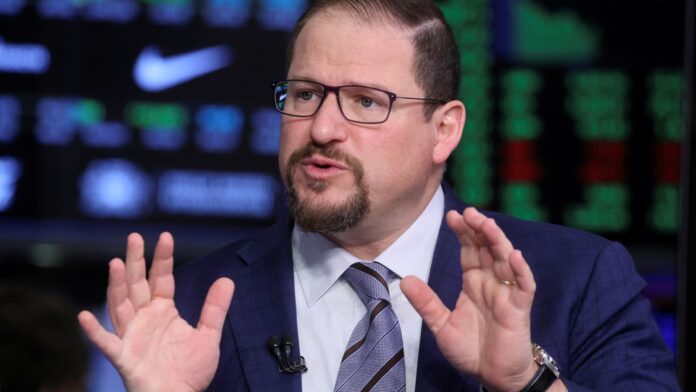 Cristiano Amon, president and CEO of Qualcomm Incorporated, speaks during an interview with CNBC on the floor of the New York Stock Exchange (NYSE) in New York, April 28, 2022.

Shares of chipmaker Qualcomm fell 7.7% Thursday, a day after the company reported weak first-quarter guidance and said it started a hiring freeze in the current quarter.

Qualcomm reported fourth-quarter earnings that were in line with analyst estimates of $3.13 per share on an adjusted basis and a small revenue beat of an adjusted $11.39 billion compared to the $11.37 billion analysts anticipated, according to Refinitiv.

But the company called for fiscal first-quarter adjusted earnings of $2.25 to $2.45 per share on $9.2 billion to $10 billion in revenue. Analysts polled by Refinitiv had expected earnings per share of $3.42 and revenue of $12.02 billion.

“The rapid deterioration in demand and easing of supply constraints across the semiconductor industry have resulted in elevated channel inventory,” the company said in the report.

CEO Cristiano Amon stressed on the company’s earnings call that the company is looking at a “temporary cyclical inventory drawdown.”

In notes to clients after the report, several analysts seemed to agree that Qualcomm would make it to the other side of the headwinds in a solid position.

“Despite the cyclical slowdown, we believe Qualcomm management is executing on its diversification growth strategy, and we anticipate Qualcomm is likely to post healthy growth trends once the inventory correction is complete,” Canaccord Genuity analysts wrote, maintaining a buy rating on the stock and lowering its price target from $225 to $165.

Piper Sandler analysts maintained an overweight rating but cut their price target from $185 to $145, saying they “see the drawdowns as limited to the December and March quarters.”

-CNBC’s Ashley Capoot and Jordan Novet contributed to this report.

WATCH: Chipmaking nations such as the U.S. are teaming up against China

Charts suggest the market could bottom after more weakness