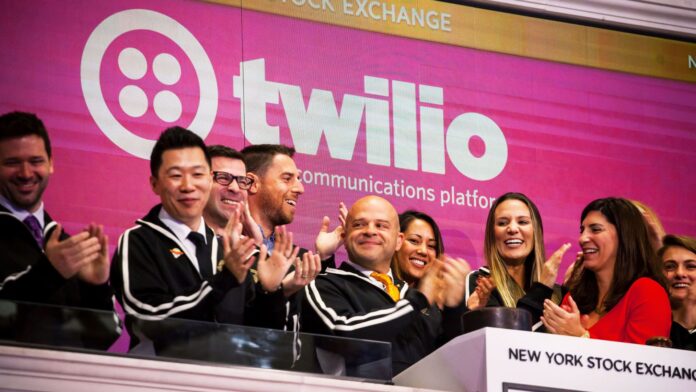 Analysts at RBC Capital Markets are moving to the sidelines when it comes to Twilio. The firm downgraded the communication software stock to sector perform from outperform after the company issued disappointing guidance. The firm also cut its price target to $55 from $110. That’s a more than 15% downside from where shares traded at Thursday’s close. Twilio has shed more than 75% year to date. “We are downgrading Twilio to Sector Perform, following weak guidance and a disappointing Analyst Day, which leaves us unable to defend the long-term story,” wrote Rishi Jaluria in a Friday note. Weak guidance The company’s third quarter earnings report was fine, but it called for only 18% to 19% of organic growth in the fourth quarter, well below expectations, RBC said. “Management blamed macro headwinds (which is no surprise to us), as well as the lack of political traffic, given Twilio refused their business this election cycle (which was a huge surprise and not communicated prior),” Jaluria said. Disappointing analyst day Then, RBC found Twilio’s analyst day to be additionally disappointing instead of being a positive catalyst. Management pulled its previously stated growth target of 30% or more and is now targeting growth of 15% to 25%. While the cut to the target was not a surprise, the new one was. “We certainly did not expect such a dramatic cut and worry competition and mis-execution is to blame,” said Jaluria. They also did not gain any information around gross margins that inspired confidence in them bottoming in the near-term or hitting 60% in the long-term. “In addition, management committed to 100-300 bps of annual margin expansion starting in 2024, but struggle to underwrite this target (and caveat it with the high levels of SBC),” said Jaluria. Twilio’s Flex product is also lagging competitors, with only $100 million in annual recurring revenue 4 and a half years after it’s launch. That’s just a fraction of the size of its competitors. Management seems to have not fully baked in the upcoming macroeconomic risk, and might not be making the right choice around segment execution, according to Jaluria. This all went against the bull case for the stock. “We believe Twilio has good technology and is playing in a large market, but increasingly appears in need of a turnaround,” Jaluria said. “While the stock looks cheap, we can no longer defend a positive stance on the name.” Analysts at Cowen also downgraded Twilio to market perform from outperform and cut their price target to $65 from $100. “TWLO is feeling acute pressure from a worsening macro, causing a significant cut to the growth outlook. Combined with a substantial restructuring of its sales force and a lack of any significant change in the medium-term margin structure, & we see continued overhangs on the stock alongside rising near-term sales execution risks,” analyst Derrick Wood wrote. Meanwhile, Wells Fargo analyst Michael Turrin said Twilio has a “long journey ahead.” “While we still believe in the extensibility of the underlying comms platform and acknowledge this is a tough time to throw in the towel, we come away expecting this transition will take time and significant effort before it can prove able to provide meaningful valuation support,” said Turrin, who downgraded Twilio to equal weight from overweight. — CNBC’s Michael Bloom contributed to this report.