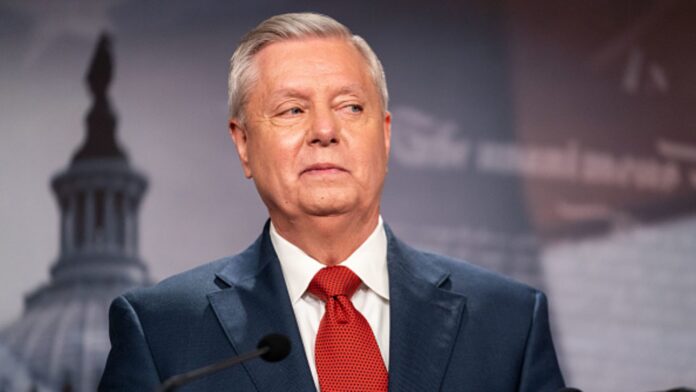 Sen. Lindsey Graham (R-SC) speaks during a news conference in response to President Joe Bidens decision to pull all American troops out of Afghanistan by Sept. 11, 2021, on Capitol Hill on Wednesday, April 14, 2021 in Washington, DC.

Sen. Lindsey Graham of South Carolina has asked a federal judge to quash a subpoena for his testimony issued by a Georgia grand jury investigating possible criminal interference in that state’s 2020 election by former President Donald Trump.

Graham’s move in U.S. District Court in South Carolina came after a judge in Atlanta signed the Fulton County, Georgia, special grand jury’s subpoena to the Republican lawmaker on Monday.

Fulton County Superior Court Judge Robert McBurney ordered that Graham, a close ally of Trump, would have to testify on Aug. 2

In a 13-page motion for the court to to quash the subpoena, Graham’s lawyers wrote, “the Constitution’s Speech or Debate Clause protects him from this legal process,” and that “sovereign immunity prohibits enforcement of the state court process on him as a federal officer.”

The attorneys also argued that “no extraordinary circumstances exist for compelling his testimony.”

“What I’m trying to do is do my day job. If we open up county prosecutors being able to call every member of the Senate based on some investigation they think is good for the country, we’re opening Pandora’s Box, Graham said in a statement.

The subpoena issued to Graham says that he made at least two calls to Georgia Secretary of State Brad Raffensperger and his staff about “reexamining certain absentee ballots cast in Georgia in order to explore the possibility of a more favorable outcome for former President Donald Trump.”

CNBC has requested comment from Graham’s lawyers and the Fulton County District Attorney’s Office, which is conducting the probe of Trump and others who participated in efforts to get Georgia to overturn the 2020 electoral win there by President Joe Biden.

What is staked ether (stETH) and why is it causing havoc in crypto?