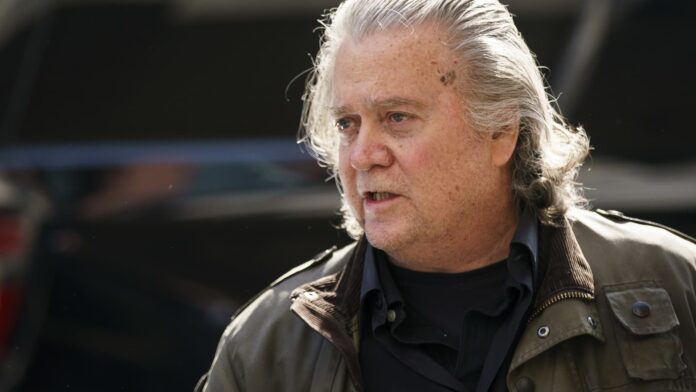 Steve Bannon, former adviser to Donald Trump, speaks to members of the media before entering federal court in Washington, D.C., March 16, 2022. Bannon is facing contempt of Congress charges related to the investigation of the January 6, 2021, siege at the U.S. Capitol.

Former Trump White House aide Steve Bannon has again asked a federal judge to delay his upcoming trial on criminal contempt charges, this time citing repeated references to some of his past comments during a hearing Tuesday of the House select committee investigating the Jan. 6 Capitol riot.

Bannon’s lawyers also said in a court filing Wednesday that “the defense learned just today” that CNN will air a one-hour documentary on Bannon on Sunday evening, the day before his trial for contempt of Congress is set to begin in Washington, D.C.

Defense attorneys said that both events create “the very serious risk of prejudice here” against Bannon among jurors to be selected for his trial on charges of willfully refusing to comply with subpoenas issued by the Jan. 6 House panel demanding documents and his testimony.

“There is just nothing magic about July 18th [the trial’s scheduled start date] that can possibly justify the risk to Mr. Bannon’s fundamental” constitutional rights to a fair trial, the lawyers wrote to Judge Carl Nichols.

They asked the judge to postpone the trial until after Oct. 15.

Nichols on Monday rejected a prior bid by Bannon to postpone the contempt trial by three months after his lawyers argued that media coverage of the House hearings would harm his right to a fair trial.

Nichols that same day also said that Bannon could not argue at trial that he failed to comply with the subpoena on the grounds of executive privilege, and barred him from calling House Speaker Nancy Pelosi and members of the Jan. 6 panel as witnesses.

The judge’s rulings effectively gutted much of Bannon’s potential defense, and led one of his lawyers to complain in court, “What’s the point in going to trial here if there are no defenses?”

Bannon, who served just seven months as a top White House adviser to Trump, faces at least 30 days in jail if convicted of the two contempt charges he faces.

In their court filing Wednesday renewing the trial delay request, Bannon’s lawyers said lawmakers at Tuesday’s House committee hearing showed video excerpts of him speaking on his podcast on Jan. 5, 2021, that had been “edited for maximum inflammatory effect.”

Later that same night, a committee member said, Bannon and then-President Donald Trump spoke on the telephone for six minutes.

The following day, thousands of Trump supporters rioted outside and inside the Capitol, delaying for hours the certification of President Joe Biden’s Electoral College victory by a joint session of Congress.

“The Special Report on Mr. Bannon, broadcast on the eve of trial is being widely promoted with a trailer and special announcements by key CNN hosts,” the filing said.

A CNN trailer for the special shows Bannon saying, “We will govern for 100 years,” the filing noted.

A narrator then says on the trailer, “In rare interviews, CNN investigates the man and his master plan,” and a video clip shows former Trump campaign manager Brad Parscale saying, “Bannon’s calling the plays.”

That sentence ends with a footnote to a description of a book titled, “Hitler’s Masterplan, 1933-1945,” which the publisher description said detailed “Hitler’s unrealised vision for a Europe dominated by the Third Reich.”

Bannon’s lawyers wrote, “The Special Report documentary, broadcast on this broadly disseminated network undoubtedly will be extraordinarily inflammatory and overwhelming prejudicial for a prospective juror, beginning service in this trial the following day.”