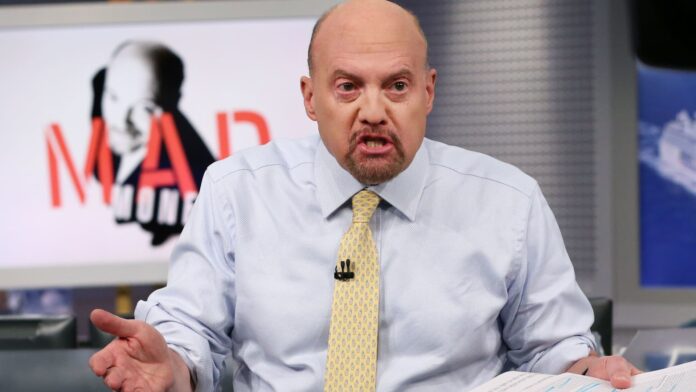 CNBC’s Jim Cramer on Tuesday said that there could be a “key moment” for investors to do some buying in the S&P 500 this week, leaning on analysis from DeCarley Trading market strategist Carley Garner.

Garner believes there’s a “moderate chance” of a rebound later this week, but the more likely scenario is either seeing some stability around where the S&P 500 is currently trading or a breakdown to the 3,500s, the “Mad Money” host said.

“At that point, though, she would want you to be a buyer, not a seller, because eventually the bears will run out of firepower and some of the money sitting on the sidelines will come back into the market,” he added. “This is a bullish scenario, people.”

The S&P 500 slid deeper into bear market territory on Tuesday as it fell for the fifth day. The Dow Jones Industrial Average saw a small decline, while the Nasdaq Composite inched up slightly.

“Even if the present is awful, stocks tend to bottom when the fundamentals are at their worst because the averages don’t reflect the present, they reflect what we’re expecting in the future, say six to twelve months out,” Cramer said.

To start his explanation of Garner’s analysis, Cramer took a look at the daily chart of the S&P 500 June futures contract:

Garner believes the S&P 500 might be oversold and could be ready for a bounce, according to Cramer.

The relative strength indicator at the bottom of the chart, an important momentum indicator, is near 30. That shows that prices are getting oversold. Coupled with the fact that the RSI and S&P 500 are diverging, the sellers are starting to get tired, said Cramer.

Garner also believes that the recent dismal consumer sentiment index number from the University of Michigan suggests that the S&P 500 is close to bottoming, according to Cramer.

If the S&P 500 makes a “miraculous” recovery above 4,030 — a key floor of support roughly 300 points above where it currently is – the current decline could be chalked up to a “bear trap” that will send the S&P soaring higher around 4,400. But without the recovery, the index could plunge to its next floor of support around 3,550, said Cramer.

“But, and this is a very big but, if we do get a decline to the 3,500s, she thinks that would be a buying opportunity. Of course, she could be wrong,” Cramer said.