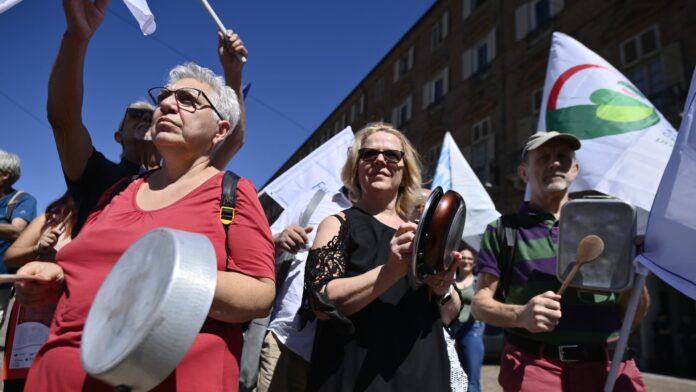 Italian borrowing costs are surging at a time when consumers are turning more worried about the cost of living crisis.

A measure known as Europe’s fear gauge has hit its highest level since the coronavirus outbreak, in what could spell out further economic pain for Italy in particular.

The difference in Italian and German bond yields is seen as a measure of stress in European markets and is closely watched by investors. The spread widened Monday to levels not seen since May 2020, indicating — among other things — that markets are becoming increasingly worried about the ability of Italy to repay its debt.

The picture is similar in other highly indebted nations in Europe.

“Yields everywhere are surging on inflation concerns, and a growing expectation that central banks will have to raise interest rates aggressively in response,” Neil Shearing, group chief economist at Capital Economics, told CNBC.

“The bigger concern in the euro-zone is that the European Central Bank has so far failed to spell out the details of how a program to contain peripheral bond spreads might work. That’s causing unease in the bond market, which has pushed up peripheral spreads.”

The ECB confirmed last week its intention to hike interest rates in July and its revised economic forecasts also indicated that the it is about to embark on a tighter monetary policy path.

However, central bank officials failed to provide any details about potential measures to support highly-indebted nations, which is making some investors nervous.

This lack of support could be more problematic for Italy than other south European nations.

“Greece and Portugal should be able to cope with more normal yields. Their trend growth is high, the fiscal situation [is] comfortable. For Greece, most of the debt is held by official creditors who have granted Greece very favorable conditions. Markets may worry about them, but fundamentals do not justify such concerns,” Holger Schmieding, chief economist at Berenberg, told CNBC.

“The real question remains Italy. Despite some reforms under [Prime Minister Mario] Draghi, Italian trend growth remains weak. For Italy, yields well above 4% could eventually turn into a problem.”

The International Monetary Fund said in May that it expects Italy’s growth rate to slow this year and next. Annual growth is seen at around 2.5% this year and 1.75% in 2023.

The Fund also warned that a “more abrupt tightening of financial conditions could further reduce growth, increase the cost of funding and slow the pace of decline in public debt, and cause banks to scale back lending.”

Soaring borrowing costs in southern Europe are not new.

At the height of the sovereign debt crisis, which started in 2011, bond yields spiked and a number of countries were forced to impose painful austerity measures after requesting bailouts.

However, despite the recent surge in yields and expectations of high inflation in the months ahead, economists do not think we are about to witness a return to austerity in the region.

“Austerity as a political response remains unlikely. Italy and others receive significant funds from the EU’s 750 billion Next Generation EU program anyway. Public investment is likely to go up,” Schmieding also said.

The Next Generation EU program, which sees European Union nations jointly borrow money from the markets, was introduced in the wake of the pandemic.

“For the time being, the economic outlook is extremely uncertain and markets are puzzled by this record high inflation,” Francesco di Maria, fixed income strategist at UniCredit, said.

“However, unlike 2011-2012, when the sovereign debt crisis occurred, the infrastructure of the European Union has improved,” he said, adding that the ECB is also likely to step in if bond yields rise significantly.

DocuSign to cut workforce by 9% as part of restructuring plan