HomeBusinessPolestar confirms it's on track to meet 2022 deliveries guidance
Business 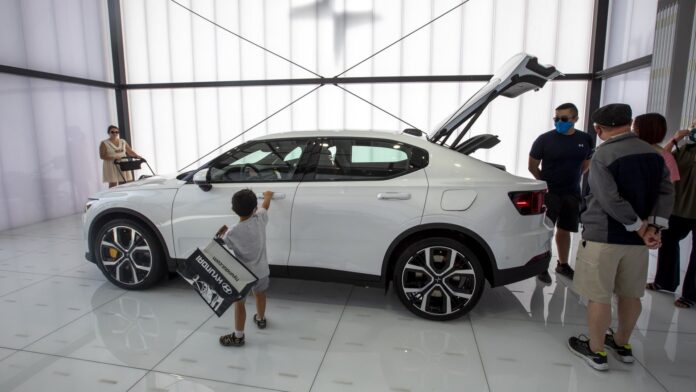 Swedish electric vehicle maker Polestar said Wednesday that it still expects to deliver 50,000 vehicles in 2022, in line with its earlier guidance, despite Covid-related production challenges at its factory in China.

Polestar said in a statement that it delivered about 21,200 vehicles in the January-to-June period, up 123% from the same period in 2021.

That total was limited by government-mandated Covid-19 lockdowns that idled Polestar’s Chinese assembly line for several weeks in the first half. The factory is now up and running on two shifts, Polestar said, and it will aim to make up the lost production over the next several months.

Polestar is a joint venture between Sweden’s Volvo Cars and Volvo Cars’ corporate parent, the Chinese automaker Geely. The company went public via a merger with a special-purpose acquisition company in June. It plans to begin production of its third model, an electric SUV called the Polestar 3, at a U.S. factory owned by Volvo this fall.

CEO Thomas Ingenlath said in a statement that the Polestar 3’s launch will be “an important next step” toward the company’s standing goal of selling 290,000 vehicles worldwide in 2025. Two more Polestars will follow the 3: a smaller coupe-like SUV called the Polestar 4, and the Polestar 5, a flagship luxury sedan based on the company’s well-regarded Precept concept car. Both are expected to launch before the end of 2025.

Polestar also provided an update on its growing retail network. The company is now operating a total of 125 retail locations in 25 countries, up from 103 locations in 19 countries at the end of 2021. It expects to open about 30 more stores by the end of this year.

These heavily shorted stocks may jump if market rallies further

Cash is pouring into municipal bond ETFs. Here’s why they could be winners for investors