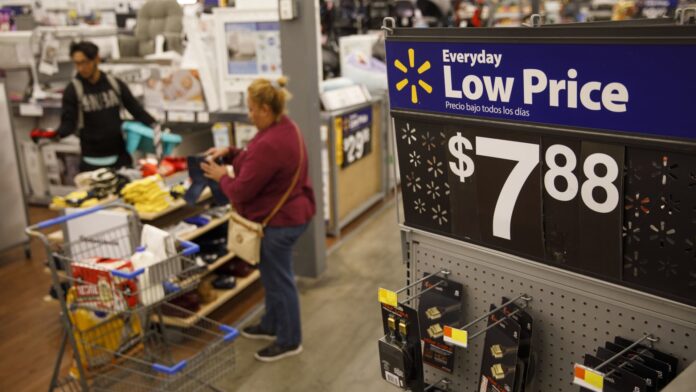 Shares of retailers including Macy’s, American Eagle and Amazon fell Tuesday, a day after Walmart slashed its profit forecast and warned that surging prices for food and gas are squeezing consumers.

The big-box retailer, which is the country’s largest grocer, said everyday necessities are eating up more of household budgets and leaving shoppers less money to spend on items they want, such as new clothing. Walmart said it will have to offer deep discounts to get rid of general merchandise, hurting its profit margins.

For Wall Street, the announcement served as another warning. It heightened concerns about shifting consumer behavior and whether inflation has brought pandemic-fueled shopping sprees to an end. Major retailers including Walmart and Macy’s are scheduled to report earnings in mid-August.

“This is a sneak peek inside the challenges and the decision making that’s happening inside of the household,” said Steph Wissink, a retail analyst for Jefferies.

Even though economists have not declared a recession, Wissink said “we appear to be firmly in a ‘discretionary goods recession.'”

Walmart’s updated outlook comes as investors sift through months of conflicting data points. The labor market has remained strong, but consumer sentiment has weakened. Inflation has grown at the fastest pace in decades, yet airports are bustling with summer travelers. Thousands of Netflix customers have canceled subscriptions, but McDonald’s and Coca-Cola say people have been willing to pay more for burgers and sodas so far.

Other factors have complicated the picture, too. Retailers are lapping a period when shoppers had extra money from stimulus checks and savings from what they typically spent on services like gym memberships, hotels and dining out. Pandemic-related purchases surged as people sprang for new kitchen gadgets, workout equipment and leisurewear — categories that have now largely fallen from favor.

Craig Johnson, founder of retail consultancy Customer Growth Partners, said the slump in discretionary spending is due to lower-income households spending more on essentials because of inflation. In addition, he said higher earners are spending more on services such as travel and entertainment instead of products coming out of the pandemic.

Target was one of the first companies to signal choppy waters ahead. It cut its forecast for profit margins twice, saying it would have to cancel orders and increase markdowns to get rid of unwanted merchandise. It chalked up the problem to having the wrong inventory, such as TVs, bikes and household appliances that were popular during the pandemic, and said it wanted to clear space for back-to-school goods and holiday shopping.

Mall-based retailers — which sell a lot of discretionary merchandise like apparel and home goods — are expected to get caught in the crosshairs.

Analysts at Deutsche Bank said they expect full-year guidance reductions from all of the apparel retailers the bank covers, as many had been forecasting an acceleration in sales and margins in the back half of the year.

Credit card data from Bank of America shows sales of clothing in the U.S. have been declining since the week ended March 12, and were down 15.6% from year-earlier levels during the week ended July 2.

Lorraine Hutchinson, an analyst for Bank of America Securities, said in a note to clients on Tuesday that her firm is cutting its earnings estimates across the apparel industry as inventories pile up and discounts are becoming rampant.

Hutchinson said niche retailers that cater to higher income shoppers, such as Lululemon, could still perform well. LVMH, which owns high-end brands like Dom Perignon and Louis Vuitton, also signaled Tuesday that higher income shoppers might still be willing to splurge. The company said its sales climbed 19% in the second quarter year over year when stripping out currency changes, led by growth in its fashion and leather goods segment.

For discounters, an upside of surging inflation is that price-sensitive customers may visit their stores more often in search of cheaper household staples. Walmart’s share of U.S. grocery dollars, for example, was 21% as of the end of June, up from 18% six months earlier, according to research firm Numerator.

But groceries have lower profit margins than discretionary items, such as electronics and apparel. That’s the reason why Walmart slashed its profit forecast, even while raising its forecast for same-store sales.